Sunshine on a rainy day...

OK yesterday was lovely, but on Wednesday morning I spent four and a half hours sorting out the mess that pertained to be the 'playroom'.  The room is a small 4th bedroom, not some huge games room or anything, but filled with so many small, broken knick-knacks and pieces of torn paper, plastic and general crap that I had reached the point of shutting the door and boarding it over.

Instead, I sorted to the bottom of every tub and box; re-housed all the rogue puzzle pieces and games parts and got it looking really good (until the kids went back in).

Completely hacked off at the time it took, the perfectly-timed arrival of a parcel from Madam Pings raised my spirits somewhat...

We have chatted about the orange/yellow vintage sheet for a while (last summer's Hexalong I think!), and Sarah sent me this with some matching embroidery thread and pre-cut squares, so now I have no excuse not to get making.

What was originally going to be a retro cushion may well now have grown (in my head at least) into a big old patchwork quilt; I have a number of pillow cases and sheets that really do need to turn into something other than an old lady's dream linen collection!
Posted by Mrs Flying Blind... at 08:10

Email ThisBlogThis!Share to TwitterShare to FacebookShare to Pinterest
Labels: gifts from lovely people 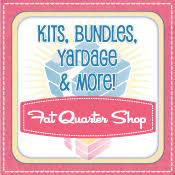